Some Thoughts on Simple Envelopers

Synthesizer envelopes or envelopers, are circuits which create a rising and or falling function when given a trigger pulse. Often-times used for raising and lowering the volume or frequency of an amplifier or filter to give dynamics to a sound over time. In this article are some thoughts on these types of circuits as well as proposed variation on the classic attack/decay envelope. Below is a drawing and description of an archetypal attack/decay enveloper. There are circuits of similar topology on Ray Wilson's site(RIP) as well as many other places online and in print. 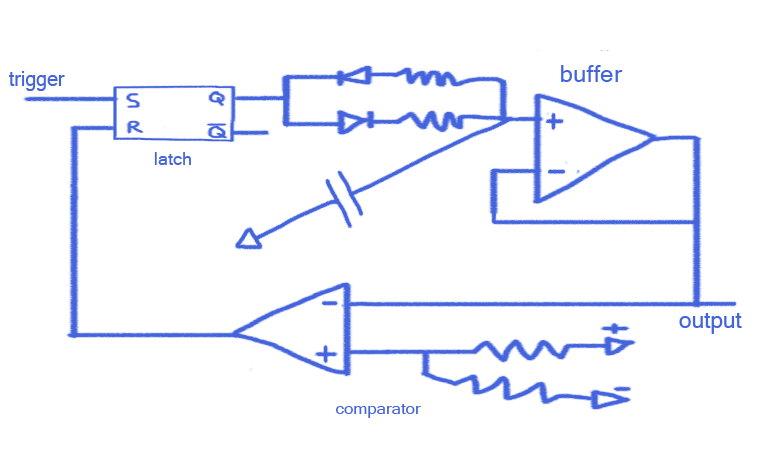 In designing the Double Knot I tried some different designs of envelopes. The circuit above is a very useful and elegant sort of circuit and I think it can be used to excellent effect as part of a very straight forward system where its only input is "trigger" and its only output is "envelope". The envelopes of the double knot needed to allow more modulations, as the idea of the device is to encourage convoluted feedback systems with many modulations.

So what is an envelope system of equal or similar simplicity that will offer more to us? It is possible to replace the diodes and resistors with a current source and current sink for rise and fall portions respectively. Both currents switched through CD4066 or the like, to first offer current to the capacitor, then sink it. This is approaching the excellent idea of the Serge universal slope generator, but also increasing the complexity of the overall design quite a bit.

To preserve simplicity it seems reasonable to remove the attack portion of the envelope and build a voltage controlled decay-only type envelope, where a capacitor is filled through diode and decays through a transistor current sink. This will give modulation possibility of decay variation without a lot of complexity to the circuit. Here is a drawing of that idea. 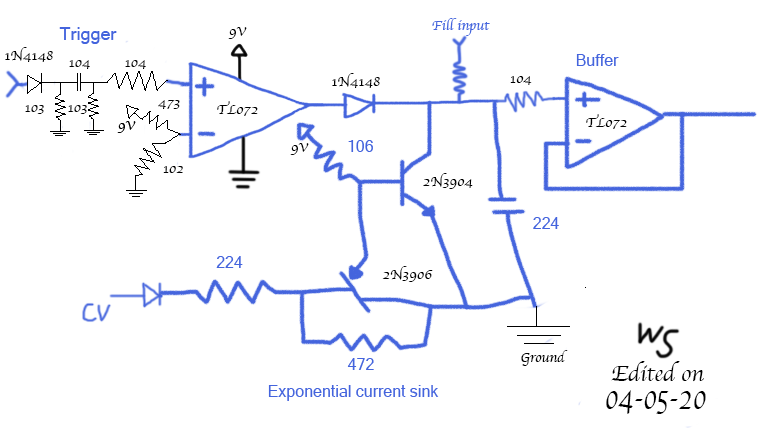 above schematic simplified and clarified on 040520

This works. The modulation input takes a voltage at the base of pnp transistor. So where there is more voltage, the decay is shorter. If some of the output is fed back into the base of this transistor the function becomes exponential (shown in the third image below). This design requires not slow op amps! I have had success with the TL074 but not with the TL064. The thin voltage slice coming from the op amp on the left is short and creates quite a fast attack, there is needed a quick-slew-rate op amp. Some o-scope images of this enveloper are below.

Quite satisfied with this simple design, I thought to add another input, maybe it would be interesting to give a voltage directly into the middle of the circuit. A parallel way to fill that capacitor. I termed this the "fill" input and put a 220k resistor attached to the capacitor. Here are some more scope images using both the "trigger" and the "fill". This modulation has a way of interacting with the current sink offering the sustain level control/ attack time aspect.

This is my simple enveloper with clear and useful voltage controlled decay as well as a slightly more idiosyncratic "fill" input. This works well in the system of the Double Knot where there are rhythmic pulses triggering the enveloper in the expected way as well as some voltages to patch from, which suit the fill input.